In case any of you were uncertain about the relationship between Mike and I, whether it was still strained or all was forgiven I actually had a little moment of worry today that Mike may take something out of context but rest assured he is fine but he expressed concern for me. He told me that people are concerned about my blogging that I might be losing my mind and that by sharing my stories I was making it look worse for myself. He asked me not to shoot the messenger. Well I let him know that I was pretty certain that the “concerned” and the messenger were one in the same and thanked him for his “concern” but let him now that I was doing great. I get it, some people think it is absolutely ridiculous to talk about your feelings and put all your vulnerabilities and mistakes in black and white. Mike and I are actually able to stay in touch more now that he has finally learned to text and I think when you look back on our conversation you will agree that if anyone should be worried about their sibling…perhaps it should be me. Love you Mikey!! 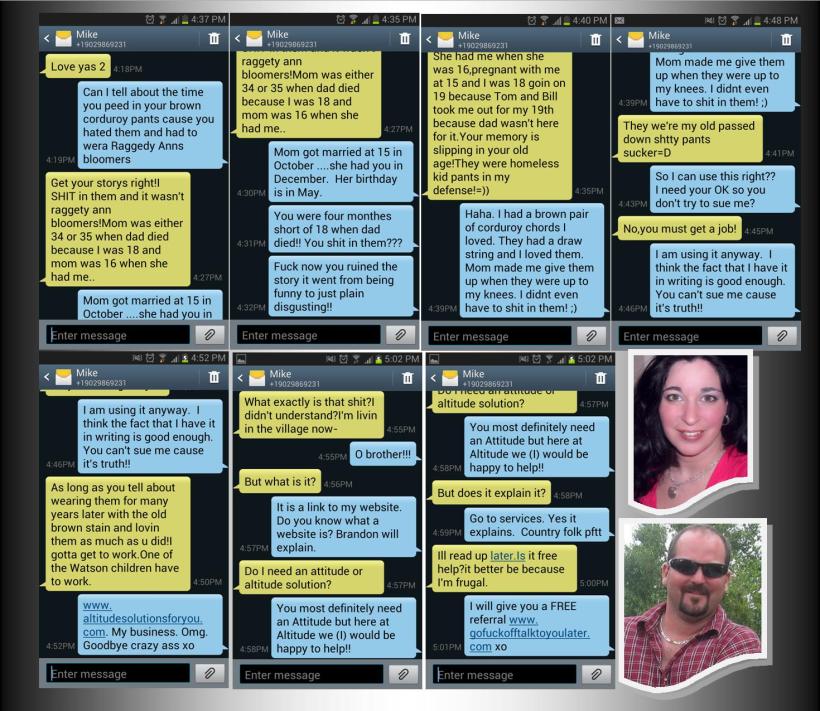 At this point of my story I want to say that I grew up as a regular girl. I dreamed of Grand castles, flowing gowns and Prince Charming. I didn’t keep a wedding scrapbook but I certainly had my dreams. My teenage walls were wallpapered with every imaginable Prince Charming. There was my all time and still favorite Jon Bon Jovi, Ralph Macchio (Karate Kid) Vince Neil (Motley Crue) Slash, Rob Lowe…you get the picture. Picking the ideal Prince Charming is not as simple as going through the drive-thru and ordering a burger. “yes I will have a Jon Bon Jovi in a Ryan Gosling body with a little dash of badboy Slash and can you throw in a good amount of Liam Neeson because I want him to be able to take care of shit!! Real life doesn’t work that way! So your best bet is to go out and meet people and experience life and not focus on who you will settle down with in your grand castle or double wide trailer, sometimes what is meant to be will be.

I met some interesting characters over the years and to be clear when Jen (Po Po) and I went out I didn’t pick up guys at bars. I preferred the ones that were already there working. Number one reason is that they had a job and it was great to have friends that were in a position to help your position. Bouncers are great friends to have because you don’t have to stand in line and mess up your hair, waiters to bring you drinks way before your glass is empty and DJs to play your favorite songs. I did have a really enamored DJ friend until an unfortunate incident where his speaker landed on top of me. I would tell you the details, I really would but my mind has blocked the memory! I truthfully didn’t date the guys from these different bars in these different positions because that would not have been smart.The good relations were kept by flirting, but not dating. I didn’t have a problem dating people that worked at the bar but not as bar staff. I dated a guitarist/singer once who had the craziest hair. He was a cross between Slash and Lenny Kravitz. He was a talented musician and sweet as apple pie but so painfully shy it didn’t go anywhere. He had the look of a bad boy without the bad boy. I found out that this is more common then not when I met a “dancer” at a best buns contest. His stage name was Michael but his real name was Peter. I couldn’t quite keep that straight. He really HATED me calling him Michael which was understandable because it wasn’t his name. The problem is I wanted to date the strong and sexy Michael. I did think it was great that he lived out of town though,except when he came to town he had to spend the ENTIRE weekend at my house. That was an ENTIRE weekend with a guy that I kept calling the wrong name and no time with my friends 😦
Things fizzled but I still have an 8×10 black and white glossy of him in a box in the garage. So in thinking I wanted a bad boy I dated a Portuguese guy that I disliked intensely. I guess at first we mistook it for a chemical reaction but we just really didn’t like each other. I think maybe he was a nice guy who was trying to be bad ass but he was just an Ass. It was cool for about five minutes. Then there was the guy who was perfect in every way, good looking, great personality, smart, independently wealthy but he snored, really incredibly loud. I know people snore but this was like a sonic boom. He was also very political which wasn’t my cup of tea so I had to tune him out a lot. He was working on this political campaign that he was so excited about and we would chat casually and that dominated our conversations for a significant amount of time. He called one night wanting to go have a drink. He said he would take me to eat if I was hungry but he had already eaten with what I thought was “Shari” Now we had a casual relationship, I liked and respected him and he was all the things I should have wanted for myself but neither of us ever pushed for a commitment or got jealous. That miffed me though. “Shari” gets dinner but I get drinks. I blew him off that night and then he called the next day to ask if I had seen his picture in the paper. A picture of him and Jean Charest. Not “Shari” Jean Charest served as the 29th Premier of Quebec from 2003-2012. So from all of this I determined that my perfect man would not snore or be into politics, he should be smart but I should be as smart, he should be a little bad ass but not just an ass and dammit if nothing else I should be able to remember his name.

I moved home to Nova Scotia in my early twenties and it was a huge change after living in the city. I missed everything but the creep jerking off at my bedroom window.

Being back with my family was great but I was gone between 18-22 and it was a small town and everyone seemed to have their little cliques. I had to take the time to reconnect with some dear friends and make new friends. I still felt like “the girl who gave the baby up for adoption” but enough time had passed that I figured everyone had moved on. When I lived in Ontario I opened up to people I trusted occasionally but back home in Truro unless you were a super friend, family or someone who was close to me at the time it was simply not discussed. It was a defense mechanism I built around my heart and very few people were allowed in.

I wondered a lot about my son though and being back in that small town I searched for him in every 7 year old boy. I learned fairly quickly that not everyone had forgotten nor were they wiling to let it be. It seems pretty ridiculous looking back at it now that anyone would throw that in my face to hurt me or to make me look like a bad person but it happened. I would learn about the power of forgiveness and friendship. I would also meet the person who changed my life and was instrumental in making sure that one day my life would feel complete. You can’t run from your life and your mistakes. You can forgive yourself and become someone you are proud of. Fall in love and you can see the stars, love yourself and you can touch them!

I am blessed to have a beautiful family and I have struggled every step of the way to get here. More often then not the struggle was with myself.